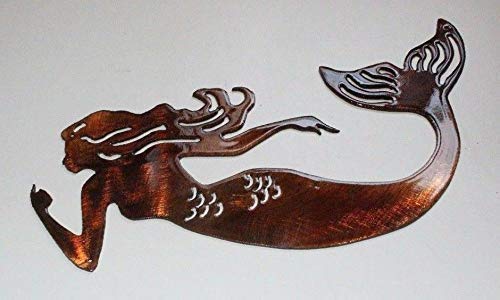 Bring a touch of the ocean into your home with our swimming mermaid. This handcrafted piece is perfect for anyone who loves tropical, ocean themes, or just mermaids in general. This piece is 100% handcrafted in the USA. Finish: Copper/Bronzed Plated with a clear coat and in other finishes. Material: 14 Gauge sheet metal Approx measurements: 11" w x 5" h and larger sizes available. Note: small holes added to aid in hanging larger pieces have hangers welded on the backside.